The Vernon ROCKS Coalition stands in solidarity with the LGBTQA+ community. 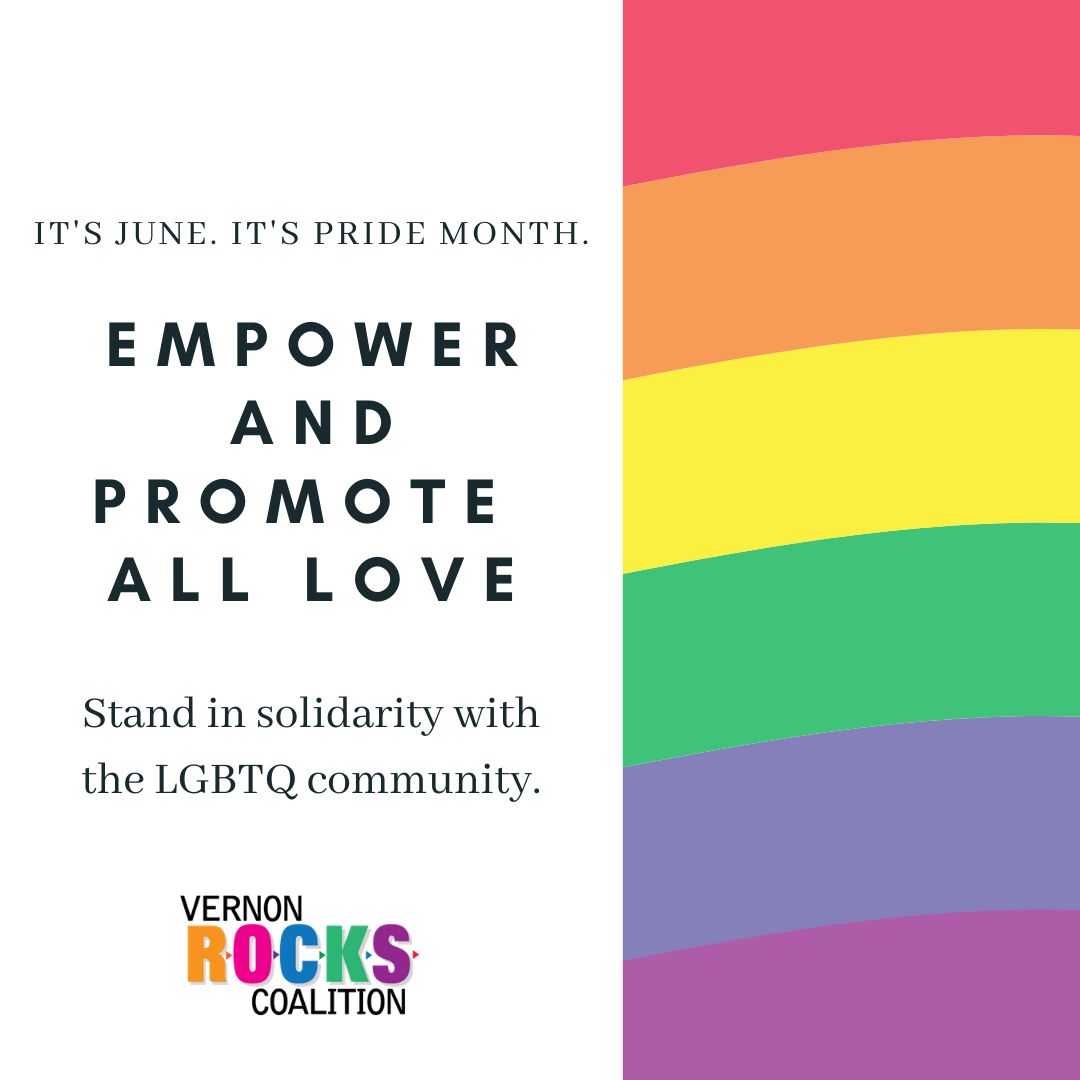 PRIDE month was developed to raise awareness and improve the attitudes of society and encourage inclusiveness. It promotes their dignity, equal rights, self-affirmation, and is a way of increasing society’s awareness of the issues they face (Awareness Days).

PRIDE takes place in the month of June because that is when the Stonewall Riots took place in 1969. We have come a long way since the riots, however, injustices remain.

Unfortunately, sexual minorities often face social stigma, discrimination, and other challenges like violence and harassment, not experienced by people who identify as heterosexual. These challenges mixed with other stressors lead sexual minorities to be at an increased risk for substance use. According to SAMHSA, substance use disorders affect 20 to 30 percent of the LGBTQ+ population, compared to 8.4 percent of the general population. 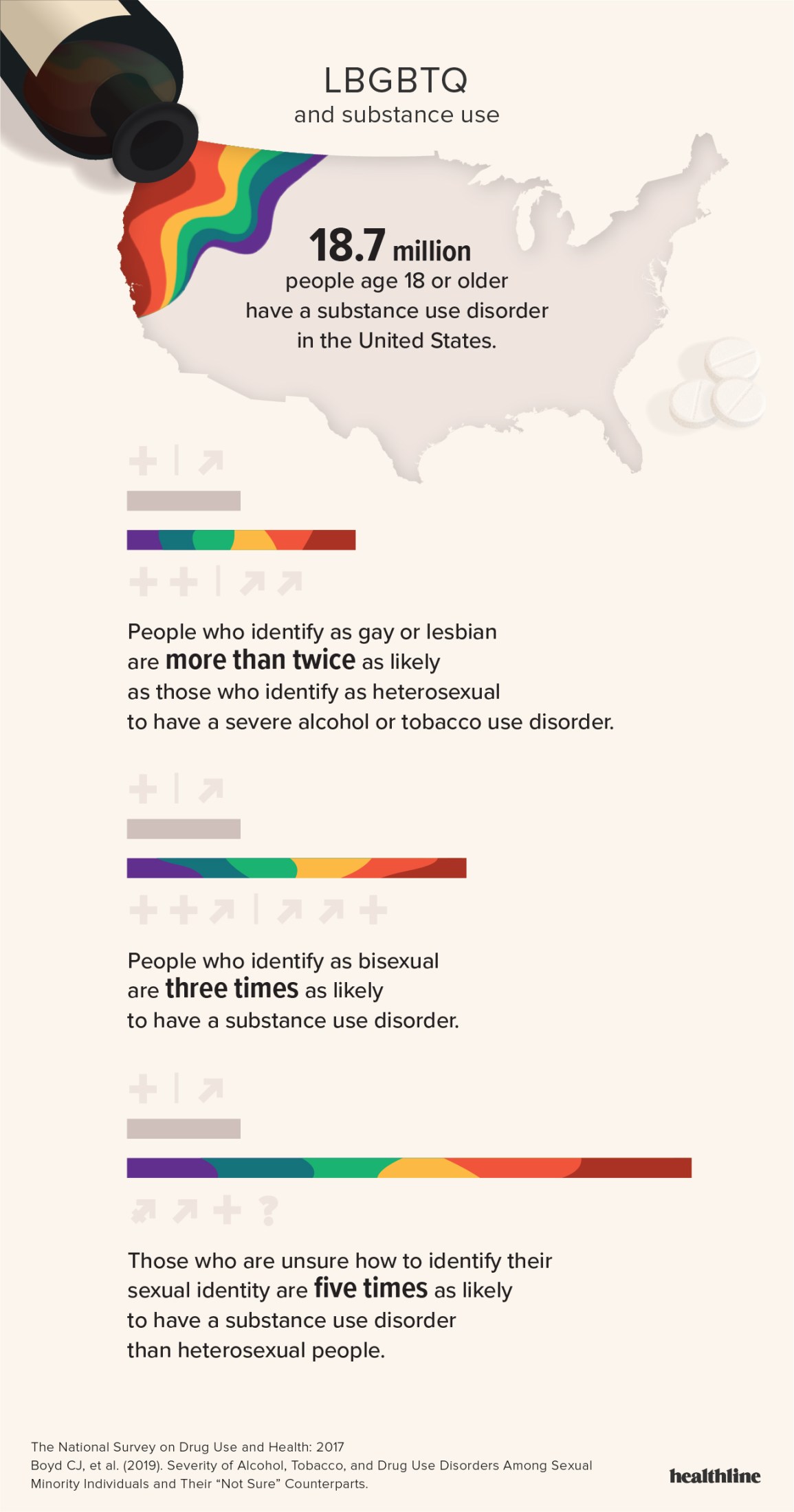 Bullying and Harassment–  LGBTQA+ youth are more likely than non-LGBTQ youth to be verbally abused, excluded, and physically assaulted.   Several studies have found that sexual minority students who are victimized in school have higher rates of drug and alcohol use than their heterosexual peers.

Family Conflict and Rejection– Parents and caregivers are the most important influence on adolescents’ choices about drug and alcohol use. Unfortunately, for some LGBTQ teens, these relationships get strained over conflicts about sexual orientation, gender identity, or gender expression. How parents and other adults react to a teen’s sexual identity has a major impact on their risk of substance abuse. Research by San Francisco State University’s Family Acceptance Project indicates that a young person’s risk of problems with drugs and alcohol decreases as their family’s acceptance of their LGBTQ identity increases.  The coming out process, initial reactions hold significant weight in a teen’s relationship to substances.   Teens are more likely to use drugs and alcohol if parents and other adults react negatively when learning of the young person’s sexual identity.

Minority Stress- While there has been a lot of change in society, persecution still exists.  When a person experiences hardship because of a socially stigmatized identity like being LGBTQ, psychologists call it “minority stress.”   Most LGBTQ teens experience some level of minority stress, even if their family and friends are supportive, which can lead to turning to substances.

Discuss Expectations– Conversations regarding the use of substances, and the consequences and rules associated with them should be discussed openly in the household.

Monitoring– Being aware of what your teen is doing and who they are doing it helps decreases substance use.

Positive Reinforcement– Parents and caregivers can demonstrate appreciation and approval for the positive things your teen does, including alternatives to drug and alcohol use. Recognizing big and small accomplishments strengthens your relationship with your teen.

Family Support– Family support for LGBTQA+ youth is crucial and one of the primary influences on substance use.

Caring Adults and Safe Schools– Teachers and coaches are important role models in youth’s lives.  Not only can they make an LGBTQA+ teen feel supported, they can impact school culture and ensure anti-LGBTQA+ harassment is NOT tolerated.

The Vernon ROCKS Coalition wants everyone to know there are supportive people, and resources to help and you are not alone. For more information on the co-occurring issue of substance use disorder and the LGBTQA+ community follow the links below.

Programs for LGBTQA+ with Mental Health and/or SUD